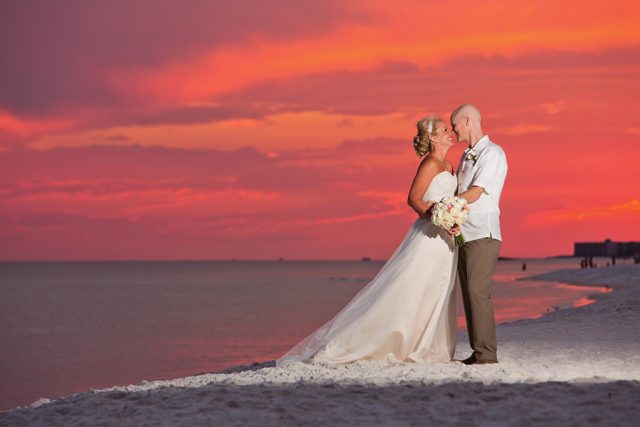 Jim and I were tennis partners for ALTA and USTA for several years. There was never any romantic interest, we were just teammates who played well together. I started playing on a Mixed Doubles team out of Bradshaw Farm in 2008. The team was made up of women who wanted to get their husbands involved in the game. The women were the more experienced players, so we got beat a lot that first year. That’s how I came up with the team name, The Blind Squirrels, from the old cliché: “Every once in a while, even a blind squirrel finds a nut.” The name was funny and it stuck.

I got a divorce in 2013, and two years later, Jim and his wife also parted ways. One night, we participated in a round-robin event, and the next night we commiserated over drinks and realized there was strong connection. We played well together on the courts, had known each other for years, were comfortable with each other’s company and before long, a relationship began to form.

Just a few months after we began dating, Jim started having pain in his left hip and lower back. He met with specialists, but none of his doctors were able to pinpoint the problem. In April 2015, Jim underwent hip impingement surgery, and afterward the surgeon said to us, “Well, the good news is it’s not cancer — I didn’t see any tumors.”

But Jim didn’t get better. He was passed from one doctor to the next for months. And then, exactly one year after we started dating, Jim and I walked into an orthopedic specialist’s office and were devastated and shocked to learn that he did have cancer. By this time, it had advanced to stage 4.

Neither of us will ever forget that moment. We were so happy and in love one moment and destroyed the next. It was the last thing we’d ever expected to hear, especially in a 44-year-old, healthy, active man. He always ate healthy and ran almost daily. And as I sat next to him in the exam room, trying to get my head around what he must be thinking, my heart was just shattered.

Jim went to M.D. Anderson Cancer Center in Houston for a consult, and after the first day, we knew he had a better chance there than anywhere. One doctor told us he had 19 months to live; we’ve never accepted that deadline.

I’ve stayed by Jim’s side throughout the chemotherapy cycles, sleeping in a chair by his bedside. It was during one of our trips to M.D. Anderson that we decided to get married. We wanted to spend every minute together because we didn’t know how many we would have.

I didn’t want him to be all alone in his big house every night trying to deal with side effects and the emotional challenges of a cancer diagnosis, and we certainly didn’t want to spend the night unwed in front of our kids, so we planned a small wedding between chemotherapy cycles. We had planned a beach trip for our kids for the fall break and had rooms already reserved in Destin, Florida, so it seemed like the perfect solution — a beach wedding with just us, our kids and Jim’s sister.

All we wanted was a beautiful wedding photo with a sunset — and boy did we get it! The wind stopped, the ocean was nearly flat and the sunset that night was epic. Now I could take care of Jim as his wife and we could spend every waking moment together.

The Blind Squirrels continue to be our greatest source of love and support. They send us encouraging texts. They’ve brought meals, picked up prescriptions and transported kids. They even donated $1,000 so that I could purchase lapel pins for friends to help remind them to pray for Jim. I don’t know what we would have done without our team. They love us and hold us up every single day. They will never know what a difference they have made in making this battle more bearable.

After the first three cycles of chemotherapy didn’t work, I requested that Jim be considered for a clinical trial study. Jim was accepted and travels to Houston every month to receive a new drug that has had great success. We hope that this is a better alternative to chemo, and while we’ll never play tennis together again, at least we’ll have each other for as long as possible.

I miss playing with him, but he always comes and cheers me on. I never would have guessed when I asked him to join my team that it was the beginning of a love story like this. We were a great team on the court, and we’re an amazing team now, even amidst one of the hardest challenges life could possibly dole out.

Tennis really is full of love.