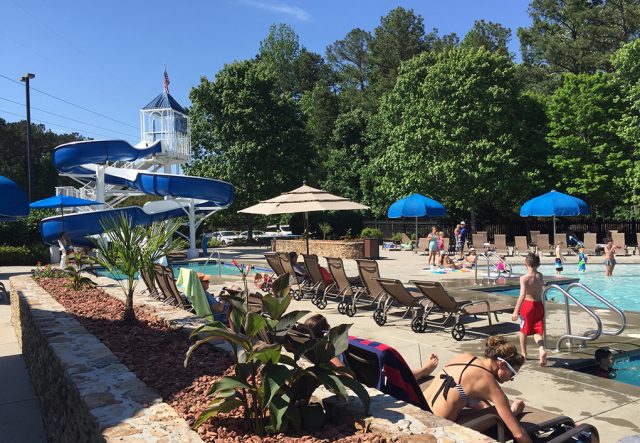 Nestled in Alpharetta, just north of the city, Windward Lake Club’s lakefront property sits on 20 acres. Recently, the facility received a facelift. New owner Chip Halbauer and club manager Andy Weiberg resurfaced the 20 hard courts and six 36-foot courts in an updated US Open color. With five permanent barbecue grills strategically placed around the courts, Halbauer envisions a place where members will gather to play, socialize, have a glass of wine and converse under the stars. His vision is coming true. On any given night, the courts are packed with tennis players who spend their post-play hours with burgers, beers and bonding.

I caught up with Halbauer during one of his frequent walks around the property. The man is 6-foot-3 with strong hands and a humble smile. With two sons coaching tennis and a daughter on the professional tour, he’s seen the sport from every angle. He carries a childish Walt Disney World-like gaze in his blue eyes, as though his club is a family fantasyland where dreams come true.

“I just wanted a place where people could be happy. They come to relax, to socialize, to hang out with old friends and to make new ones. I’m trying to build a place where I’d want my kids to grow up, a place where I want to be when I get old. Quite the dream, eh?” says Halbauer, pointing at a father sliding down the slide with his smiling child on his lap.

A gentle stroll from the courts, Windward’s marina hosts more than 100 berths, most of which sport pontoons and watercraft to carry local social groups across the lake. The pre-dusk hours find parties of wine drinkers, tennis players and young families all gathering to watch the crystals of sunlight glinting off the water. Fishing is optional. On occasion, tennis players will leave the courts, grab a bottle of wine and jump into a pontoon for a lake tour where they’ll float by houses formerly owned by singer Whitney Houston and Atlanta Braves All-Star Chipper Jones.

When members return to the docks, boaters slip on their sandals and walk the wooden boards to the four swimming pools where families release fierce-faced children into the diving area. Aside from the waterslide, the diving pool and the small water park, there’s a snack bar offering double burgers. At least one family seems to have forgotten their swim trunks and a T-shirted father tosses his 3-year-old skyward as open-mouthed youth stare with envy.

As we make our way to the courts, Halbauer explains his new junior tennis program. “In the past, we’ve had some good tennis players here. Today, we are in the genesis of developing great tennis players. The new program has a very structured curriculum where we treat every child as if they are going to be a professional tennis player,” he says. “In a world where so many kids want immediate gratification, we believe there’s a huge benefit to learning lessons about hard work and pursuing long-term goals.” To achieve his goals, Halbauer recently hired renowned California coach Craig Cignarelli to rework the professional coaching staff. “Craig is one of the elite developmental coaches in the world. Together, we are going to build something very special.”

Beneath a group of pine trees, two platform tennis courts sit behind the courts where four players engage in an intense on-court battle. “A few people wanted us to take these courts out to make room for more tennis. As you can see, that would not have gone over well,” chuckles Halbauer.

We pass through a grove of trees decorating the landscape and two women pass by walking a dog. With typical Southern hospitality, they call out “Good afternoon,” and stop to watch one of the matches. Just outside the clubhouse, two ALTA teams enjoy self-made burgers and cocktails. In the winters, this gathering will light the fire pit and roast marshmallows while sipping hot chocolate or toddies. For now, however, they fight off the summer sweat and boast about how many league titles they’ve won.

As Halbauer points to the clubhouse and talks about the upgrades he wants to make, a group of older men wanders down toward courts one and two. Halbauer nods and waves. Shaking his head with pride, he says, “Those guys have played with the same foursome for more than 20 years.” Perhaps it is his own future Halbauer is seeing — longtime relationships forged over a few drinks and a tennis court. Perhaps there will come a day when his kids take over the club and walk through the trees, nodding to their father as he makes his way down to court one. And maybe, just maybe, his dreams will become his children’s reality.