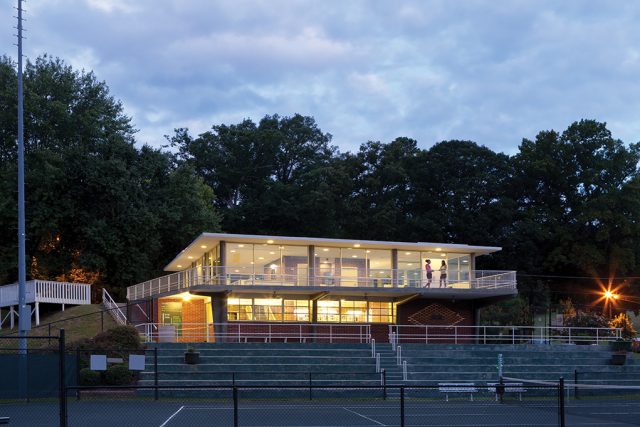 At 64 years old, many would be thinking of retirement. Not Bitsy Grant Tennis Center. The storied tennis complex continues to be a vibrant player in the remarkable story of recreational tennis that is unique to Atlanta.

Built in 1952 and designed by Atlanta architect Richard Aeck, Bitsy Grant is a prime example of the venerated mid-century modern style. “Bitsy Grant is important to the history of tennis and to the history of architecture. It is a superior example of mid-century design,” says Jack Pyburn, a principal at Lord Aeck Sargent, the firm that led restoration of the building in 2009.

Tony Aeck, principal founder of the firm and Richard Aeck’s son, also worked on the restoration. “Being here is one of my earliest recollections of being with my dad. The building looked much bigger to me back then,” he says with a laugh.

It’s true, the building is not large, but it efficiently and elegantly serves its purpose as the anchor for 13 clay courts and 10 hard courts. With 141 ALTA teams in 2016, Bitsy Grant is the organization’s largest facility. It is the only facility in the city with public clay courts, and many are known to drive miles to take advantage of the surface.

On a tour of the building, the two architects pointed out the features that typify mid-century modern design and commented on the work that was needed to refurbish the building. As lead on the project, Pyburn was glad to find, when the renovation began, that most of the original elements were still in place, such as tile, fencing and the graceful cantilever supports of the viewing deck that allow an unobstructed view of the courts from below.

He was not as enamored of the paint that had been applied to the concrete columns. “Bare concrete was a more acceptable finish during the period, but over the years they had been painted,” Pyburn says. “We removed that.”

Ugly AC units and multiple roofs had been added to the top of the structure over the years, ruining the original clean lines. A less obtrusive solution for air conditioning was installed on the interior, and layers upon layers of shingles were removed to return the roof to its slimmer self, which is more in keeping with the period’s look.

The original windows, which were replaced with thermal panes during the renovation, were operable in the early days of Bitsy Grant since there was no air conditioning, but Richard Aeck solved that problem with his design. The center portion of the building worked like a chimney. When the windows were opened, the hot air was pulled up and out through the top of the building, leaving it cooler and more comfortable.

That “core” of the building now houses office space, storage and the building’s mechanical systems. The upper level surrounding it is a sleek square of glass that offers visibility through the building from the front all the way to the courts at back. On the lower level are locker rooms and a small gathering area that gives players a respite from heat or cold during matches.

But the real action is outside on the upper level’s small balcony or on the patio and bleachers below that overlook the courts where Atlanta’s own Bitsy Grant “held court.” Grant, whose real name was Bryan Grant Jr., earned the nickname because of his 5-foot-4, 120-pound frame. A lightening-quick player, he was a tennis legend in the 1930s who defeated almost all of the top-ranked players of his time. He was inducted into the Tennis Hall of Fame in 1972. The tennis center was named for him in 1952, and he continued to play there until his death in 1986.

His popularity helped mold Atlanta into the tennis city it is today, and the building that bears his name continues to play a major role as players young and old carry on the ALTA tradition. 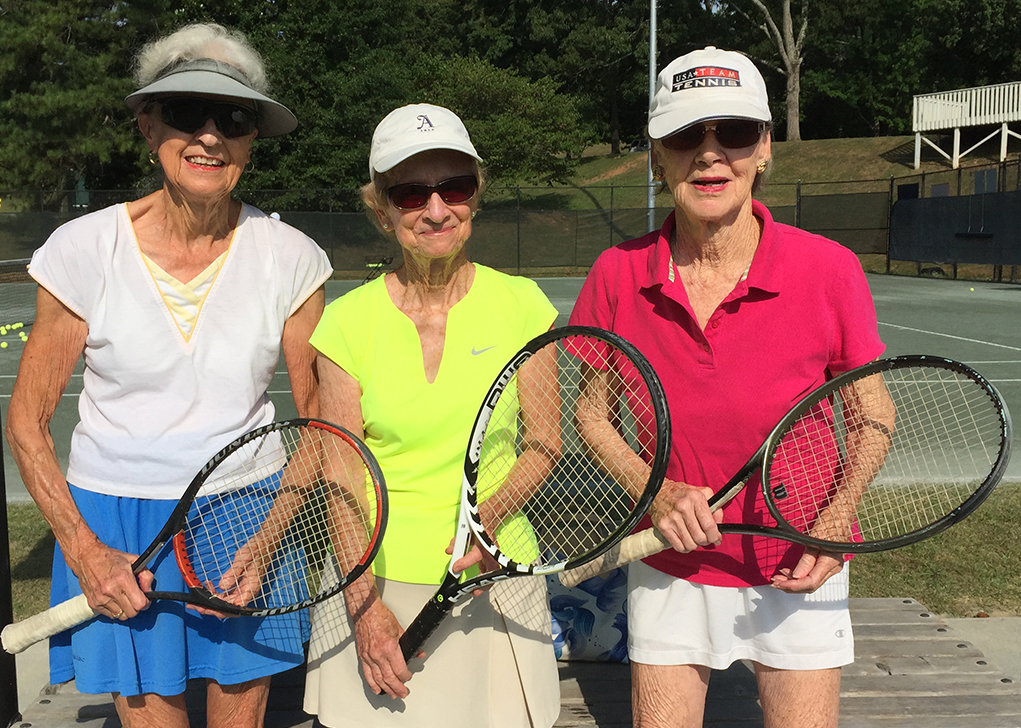 Back in the day, Bitsy Grant Tennis Center was ALTA’s headquarters. It is a time that member Anne James remembers fondly. That was when she worked with Charlie Cox as he pioneered the start of ALTA’s league play.

ALTA’s history dates back to 1934 when the organization was known for tournament play. Cox had the vision of league play, and in 1971 he made that vision a reality with the help of volunteers like James. She moved here from Williamsburg, Virginia, in 1961 and played tennis on the Georgia red clay courts at Piedmont Park. Soon she was playing at Bitsy Grant and Ansley Country Club, a ritual she continues today.

She’s not sure how Cox got her name, but when he asked her to help with the new leagues, she agreed. “We did scheduling on Ping-Pong tables in Bitsy,” James recalls. “I came home, typed them up and took them to the printer. It was so much fun trying to make it work. The captains are really what makes it go.”

She continued to volunteer for seven years and witnessed the extraordinary growth of ALTA during the ‘70s. “We started with one page of rules. Now it’s rather complicated.” She also witnessed the evolution of lineups that included singles and doubles play to exclusively doubles play and the addition of a fifth line. “They wanted to get more players on the court.”

During those years, she began almost every day playing tennis with the ladies. “Afterward, I would go to my part-time job, then I played with my kids in the afternoon, then my husband came out around 5 p.m. to play.” Many of those morning matches with the ladies were on courts next to Mr. Bitsy Grant himself, the Atlanta tennis legend for whom the complex is named. “Bitsy would hold invitationals for the pros, and it was real fun to go out there and watch.”

James still plays Mondays, Wednesdays and Fridays, oftentimes at Bitsy. “It was wonderful coming from a small town where there were only courts at college campuses. I thought Bitsy Grant was fabulous the first time I saw it.”