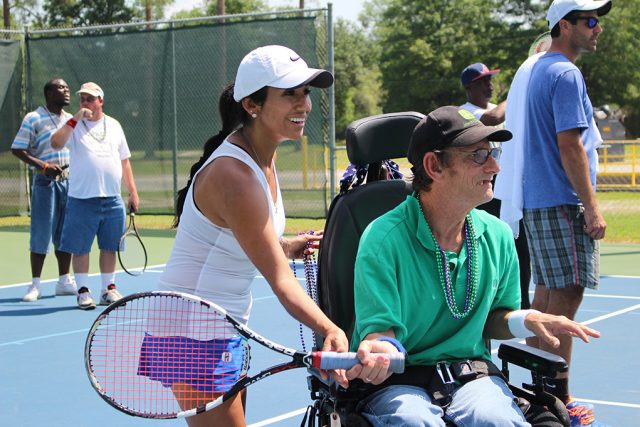 Since its inception 41 years ago, the Mitchell County Pro Tennis Invitational in southwest Georgia, which annually attracts several ALTA members and local pros, has helped raise more than $1.35 million to support the community’s disabled residents, children’s after-school clubs and many more charitable programs.

Eddie Williamson, Camilla resident and a former No. 1 player at Auburn University, created the pro-am with the help of his wife, Nan, in 1976. Originally, the couple footed the bill for the event, along with local banks that donated $50 each; and only seven pros were invited to compete the first few years.

“In 1976 in our little town, people started playing tennis,” Williamson recalls. “It just started booming everywhere in the nation because everyone was interested in getting fit and getting healthy. Someone asked me if I would start a little tournament, so I invited the local pros from Valdosta, Thomasville and Tallahassee [Florida].”

Within just a few years of starting the pro-am — which now includes professional tennis players competing in singles matches, tennis clinics, socials with upward of 300 people in attendance and amazing home-cooked Southern food — Williamson says residents just started walking up and handing him checks to help operate the pro-am. The first check he received was from a local elder who gave him $500. “That just blew me away,” Williamson says. Today, they have more than 20-plus corporate sponsors.

Over the next four decades, the pro-am continued to grow, and the community now welcomes 24 pros each April. The list of pros has also become more prestigious. Former participant Roy Barth played in the pro-am for 25 straight years — he’s one of three who has played for nearly three decades in the event. Barth played on the pro tour for several years and has run the Roy Barth Tennis Center at the Kiawah Island Golf Resort in South Carolina for 40 years. Other longtime participants include Armistead Neely, an Atlanta pro who has won 11 pro titles and appeared in three Grand Slams; and Geoff Moore, who is originally from Brisbane, Australia, and has won the Atlanta Senior Invitational Tournament Singles Championship three times in his designated age group. He is also currently the USTA National 60’s Clay Men’s Doubles champion.

“It’s fun to go back and play with your peers and compete again for three or four days,” says Barth, who has not played in the pro-am for about five years due to surgery but hopes to return in coming years. “You realize [by] participating in this that you’re getting to be a part of something that truly gives back to the community. Some of the best matches I’ve ever played are in Camilla.”

Seeing the support year after year for the pro-am, Barth says that it shows him how much of a difference one person can make in a community. “Eddie Williamson single-handedly created this event because he loves tennis. It’s incredible what he’s done and what the community has done. It really puts things into perspective, what can be done to help a community and what tennis people can do,” Barth says.

Recruiting Atlanta Pros
Over the years, Williamson says he hasn’t had much trouble rounding up pros to participate in the event. “I’m very pleased that we’ve been so successful. And to be honest with you, most people want to come,” he says. “Most people are calling me and trying to see how they can get an invitation. I’m pretty fortunate there, and the main reason is because they have such a good time.”

Today, with the help of several Camilla friends and residents, the small town welcomes 20 male and four female professionals each year. They each compete in a doubles tournament, starting with a draft Thursday night, while also helping put on clinics for local women, children and clients from the Mitchell-Baker Service Center, a local physical therapy clinic that serves individuals with disabilities.

Dick Dieckman and Dan Bollinger, longtime residents and friends of Williamson, help coordinate the clinic schedules and pro recruitment. Dieckman has worked with Williamson and the benefit for nearly 35 years. “I don’t think the players really had a concept of what we were trying to do down here in the early years, but by having them mingle with the clients at the service center, for example, has been very beneficial and they have just been great.”

Bollinger, who relocated from Missouri to Camilla in 1994, became involved in the pro-am 21 years ago. “It is one of the finest community events that I’ve ever been around,” he says. “I can’t tell you how much fun people have playing with the pros; and Eddie is very particular about his pros. They aren’t just nice players, they are nice people, and that’s really, really important to us.”

“For a community of this size, approximately 5,500 people, to raise more than $1 million is just unheard of,” Bollinger adds. “It’s amazing!”

The pro-am team is also supported by Carol Shiver, Courtney Rubendall, Deborah Sanders and Laura Beth Tucker, who help with the event and socials. Williamson says their hard work has contributed greatly to the success of the tournament.

Layman, the director of tennis at Standard Club in Johns Creek, has played in the pro-am the last six years, alongside his co-worker and the head professional at the club, Lloyd, who told him about the event.

“The pro-am is unparalleled because of the incredible hospitality from the locals, level of tennis from the professionals and the amount of money raised for the local Boys & Girls Club of Mitchell County and other various charities,” says Layman, adding that he is often asked why he would travel more than three hours south for a pro-am. “It is an amazing weekend with pros from around the Atlanta and Florida area that have an impeccable reputation in tennis. The locals and their Southern hospitality cannot be beat. More importantly, it is for a great cause.”

Lloyd, who’s played in the pro-am the last 19 years, says he’s developed great friendships in Camilla over the years and he looks forward to it each year. “I am honored to be asked back each year. I devote this time because it really means a lot to the families and community of Camilla,” he adds. “They welcome us with warm hospitality and most of the same tennis professionals return year after year. The tennis professionals are great friends and great competitors on the court!”

When asked what it means to him to see so many ALTA members and metro Atlanta pros participating in the pro-am, Lloyd says there are very few cities in the U.S. that has such a talented group of tennis professionals in one place, referring to Atlanta. “This is a great chance for us to be tennis ambassadors to a smaller town in south Georgia and to come together in Camilla to raise awareness and resources for those in need,” he says. “It is a unique experience filled with good friends, great tennis and warm hospitality. I’m already looking forward to next year!”

Roveri, an account executive at SAP and part-time tennis pro at Laurel Springs subdivision in Suwanee, has played in the pro-am the last 11 years. Like Lloyd and Layman, he returns year after year for the opportunity to give back to the community and to play competitive tennis while raising money for local charities. “We consider ourselves as being part of a very select group of players, and we have developed friendships that will last forever,” he says.

His favorite part about attending is hard to pinpoint, but he enjoys hanging out with his friends, enjoying fantastic food and the accommodations provided by Williamson and his support, playing competitive tennis and interacting with the locals.

Answering a Financial Need
Each year, Williamson decides which charities in Camilla that he would like to benefit from the pro-am. This year, he learned that the 41-year-old fundraiser would receive a substantial contribution from the Fogg Charitable Trust, bringing the 2016 pro-am’s total to $250,000. Approximately $100,000 was donated to the Mitchell Baker Service Center and another $100,000 to the Boys & Girls Club of Mitchell County.

“In uncertain economic times, the funds raised from this event are crucial,” says Ginna Waters, executive director of the service center, which serves developmentally disabled adults in Mitchell and Baker counties. “In the past, we have used money from the tournament to purchase a much-needed new vehicle to transport our individuals in, or to buy much-needed technology to broaden their horizons. We have also used funds to send them on trips to places, such as the beach and Universal Studios, as well as helping fund Special Olympics competitions. This money is used to enhance their day-to-day lives and help us fund things that we otherwise would not be able to do. It is a tremendous blessing to us!”

The board for the center has not decided what they will do with this year’s contribution.

Ondrea J. Peoples, chief professional officer with the Boys & Girls Club, which serves an average of 350 children per day at four sites in Mitchell County, says their organization can only thrive with support from individuals, businesses and the community. “Without the continuous financial support from this event, we would be devastated,” she says. “Not only does this event support us financially, Mr. Eddie Williamson himself is a big support and advocate for young people. For years, he has enlisted our teens to work with him before, during and after the tournament and the bonus is they get paid. And without him even knowing it, he has been a mentor for them.”

Money contributed to the club is used to enhance programming that meets the needs of youth in the community. This year, the teen computer lab will need to be updated.

Clients from both the service center and club participate in clinics with the pros each year as well. “The tennis clinic with the pros is truly one of the highlights of our year here at the Mitchell Baker Service Center,” Water says. “Many of the pros have been coming for years and have forged a friendship with our individuals. They spend an hour instructing, encouraging and laughing with us. It is such a fun event, and there is a smile on every single face!”

As for the Boys & Girls Club, Peoples says it’s an opportunity for the youth to not only learn the fundamentals of tennis, but to interact with true professionals who are willing and eager to learn about their youth. “They truly care about our children’s well-being,” she adds.

To learn more about Camilla, the tennis community it serves and the invitational, visit camillatennis.com.