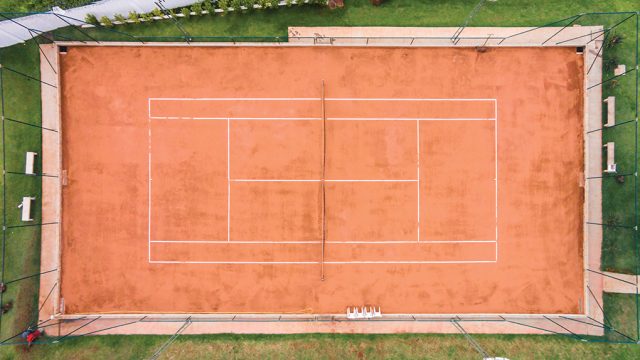 One of the first questions a tennis player may ask a new doubles partner at their first match is: “Which side of the court do you prefer playing — the deuce side or the ad side?” Normally, the new partner’s response will sound something like: “Well, my forehand is better, so I prefer the deuce court side.”

While it is perfectly rational to pick a side of the court to play based on whether a player prefers to return from the deuce side or the ad side, the breaking-the-court-into-halves mentality becomes a problem when the point progresses past the return of serve. The reluctance to cover a middle ball simply because it is not clearly on “my side of the court” may impede the versatility of doubles teams.

When teaching a team to play better doubles, the job of the tennis professional is to coach the team to envision the court as split into thirds, not into halves. By charting the ball placement during several games in a doubles match, it becomes apparent that the majority of balls are hit down the middle third of the court, not in the outside thirds near the alleys. Court coverage in the middle third of the court is of utmost importance for the success of a doubles team, and too often players are traditionally taught that the person who should cover a ball down the middle is the person hitting a forehand. That perceived rule simply should not exist in high performance doubles play.

Instead, players need to be taught that both partners should eagerly attempt to hit the ball down the middle. Stop deferring to your partner and shying away from the middle ball based on what side of the court you play.

Coaches should take a proactive, not a reactive, approach to coaching partners in doubles. Too often, coaches wait until after the point ends to instruct players on who should have hit the middle ball. This approach is reactionary — coaches are teaching doubles players to react to the ball that their opponent hits. Coaches should change their instruction to a proactive approach where players can pre-plan what shot to anticipate.

Truly, it is both players’ responsibility to venture into the middle third of the court. Whose ball the shot down the middle becomes should be based on who hit the previous shot, each partner’s individual strengths and weaknesses and court positioning. Who takes the ball down the middle should never be based on what side of the court you initially chose to return your opponent’s serve because that mentality turns doubles into glorified cross court singles rallies.

When coaching players to serve in matches, there are three basic service placements: out wide, into the body and down the T. It is time to think of the doubles court split into thirds in the same manner. It is easy to determine which player should hit the balls out wide to the ad court or deuce court based on the side of the court that they traditionally prefer to play. Envisioning the doubles court in thirds rather than halves can help transform two separate players covering separate sides into one unified team that is unbeatable down the middle of the court.