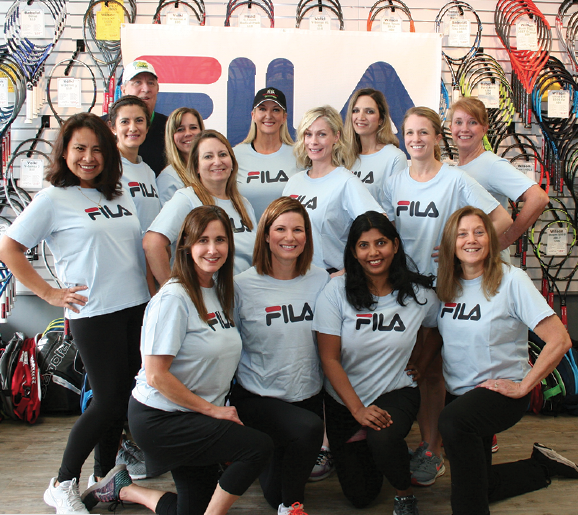 They won FILA for their team!

Last fall, we asked readers to tell us why their team should be outfitted in new gear from FILA. We read many great stories, but ultimately, FILA says the story from Wild Timber Sunday Women C8 was most deserving of the prize. Read what player DeAnna Emborski had to say:

We deserve to win FILA outfits and gear because we have a Cinderella story (OK, more like the “Bad News Bears”…but it’s a great one!). I joined the team in March 2017 (having not played tennis since I was 8). They took me in with open arms. Needless to say, spring season wasn’t so great, but I (and we) were determined to come back strong in fall. So we committed to practicing all summer, literally five days a week/three hours a day and when fall season play started we hadn’t realized just how good we had become!

We started winning – a lot – and we started realizing we were going to City Finals (I wasn’t really sure what that was or entailed, but I was IN), so we worked hard (still practicing almost every day) and kept winning. We realized close to the end of the regular play season that we really could go to City Finals – we needed to win ALL five lines of our last regular season match to break the tie we were in for (2nd place in our division because we had beat the team we were tied with) AND WE DID. Then we focused on winning three lines each playoff match, which we did. And there it was, WE WERE GOING TO ALTA CITY FINALS – technically UNDEFEATED so far! We were playing the team that had actually had won our division (but we had already handed them their only loss … so far). City Finals day came; we were ready. Just like in our regular season match, we lost lines 1 and 2, but won line 4 with the last two matches in play. Then the skies opened up and it poured (not to mention it was about 40 degrees), so we had to delay play for one week. We were split sets on line 3 and UP one set on line 5! We returned the following Sunday, prayed together and cheered on our fellow teammates whose racquets held the answer: Who would be the city champions?

We came out ready to WIN and that’s exactly what we did! We are the Sunday Women City Finals champions! Who would have thought a team of ladies, who (for the most part) had been playing less than four years, would come from losing almost every match to taking it all in fall 2017! I am so proud to see these ladies (and myself) go from barely keeping the ball in the court to serious competitors by just saying, “We WILL”…and we sure DID!