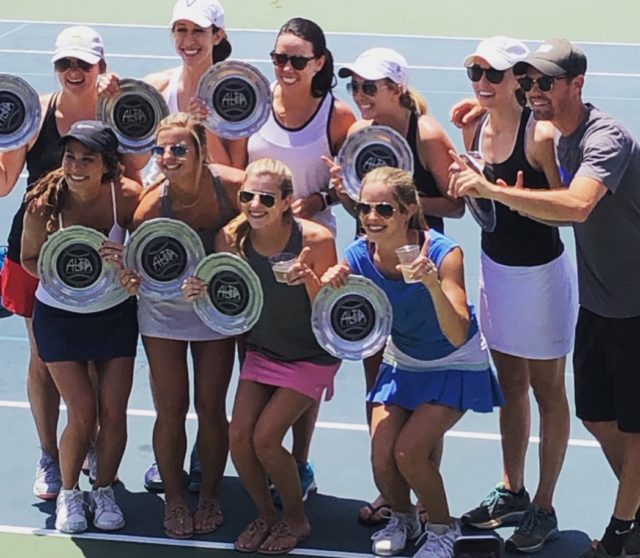 ALTA’s premier event for each season is the City Finals Championship. So many players never even make it to City Finals, yet others have trouble deciding where to display their dinner and salad plates. It’s something really special here at ALTA, and for many, getting the big plate is truly symbolic of so many team experiences and victories. One such team out of DeKalb Tennis Center displayed this perfectly during the Sunday Women’s B5 City Finals match against Wild Timber. We decided to feature the two women who led the charge in our Captain’s Corner.

Meet Christina Abrams, the captain, and Amanda Morgan, her co-captain. They live in the same neighborhood and met playing side by side on their local Ashford Park tennis courts two years ago. They joined forces and have been partners ever since. While the team has evolved over the years, they have kept a consistent group of women. “Amanda has consistently been my partner, and I’m the lucky one for sure; she’s the team all-star,” says Abrams.

When they arrived at DeKalb Tennis Center to play their City Finals match, Abrams said they couldn’t help but laugh to themselves as to how lucky they were to be there. They were down 4-1 and pushed the first set to a tiebreak but lost. “We ended third in our division, yet somehow made it into playoffs, and eventually the big day — the city championship.” Morgan agreed. She says they felt really lucky to squeak into the playoffs. “We are all in this stage of life where we are traveling, going to weddings and bachelorette parties, and just overall, really busy, so availability was really tough some weeks,” she said.

Abrams said showing up that Sunday morning was comical. “It was my first-ever city championship, and I had no idea what was going on with the matching outfits and the decorated tables,” she recalled. Luckily, they had some ALTA veterans among the group, so those ladies took the lead on their table. “We have two sisters who joined the team, so their mom came to set up the table for us, otherwise, we probably would have had just bananas, water, and champagne,” Abrams joked.

So, the matches begin and before they know it, Line 1 had lost, and the Line 2 players were down. Morgan said she just assumed they wouldn’t have a chance at winning the title. “Our first two lines usually never lose, and I was so nervous,” she said. Abrams and Morgan were playing Line 3. They were down 4-1 and pushed the first set to a tiebreak but lost. They then took the second set, 6-3. Their Line 2 then lost 6-4 in a third set, so they knew they had to win their line.

“We were down 5-2 in the third set; we had just seen our Line 4 win handily, and our Line 5 was up as well when we started our third set,” Morgan said. She added that she then looked at Abrams and said, “Hey, we actually have a shot at this. Let’s not be the reason our team loses City Finals.” They fought their way back and took the third set and the match, also in a nail-biting tiebreak.

“We just said ‘let’s do this’. It took two tie-breaks, but somehow we made it happen,” said Abrams. “We didn’t even think we had a shot when we stepped onto the court, but we were thrilled to be there and just decided to have fun with it.” That fun turned into a real chance at winning, and then the competitiveness of the two ladies came to life.

What also came to life were the Line 5 players. They had won their first set, 7-5. “When Amanda and I finished, the Line 5 girls were down by the exact same score as our third set, 5-2. Just like us, they made a killer comeback and pushed it to a tie-break,” said Abrams. “They saw me hug Christina after we had won,” Morgan added. Their teammates were determined to “bring it,” fought back to get to 6-5, and then it was 6-6. “Once they started the tie-break, they were just on a roll and brought it to the big finish with a 7-1 score. It was so incredibly exciting,” said Morgan. She also gives credit to all of the supportive boyfriends, husbands, and parents who watched, cheered, and gave the entire team the added boost to win the big plate.

Carlyle Yealy, is half of that sister duo referred to earlier, and she was on Line 2. She says City Finals was such an amazing experience and believes they never imagined winning after forming a brand new team and barely making the playoffs. “Everyone played such a pivotal role, but we really owe our successful season to our captains, Christina and Amanda, not only for their dedication throughout the season but for their unbelievable comeback in the finals,” says Yealy.

Abrams and Morgan both believe it was a magical season. “I am beyond lucky to be best friends with my tennis partner. Tennis brought us together, and now we live life together on and off the courts,” says Abrams. They share even more now, and that includes an ALTA experience and a first City Finals Championship they will never forget.