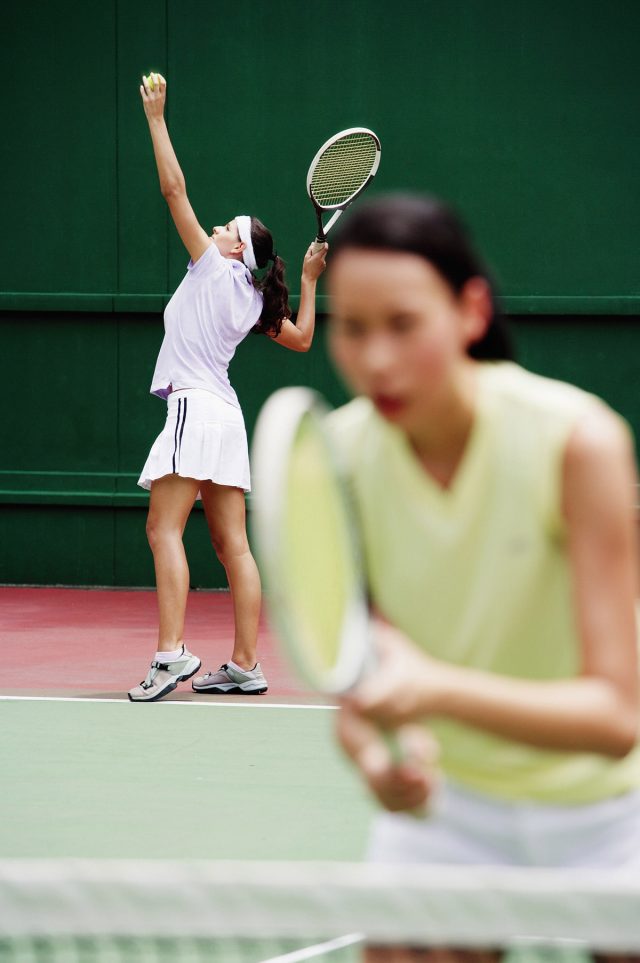 Return tactics depend on serve speed. Assuming the first serve is fast enough to prevent you from hitting short angles or blasting balls at the net player, returns should be hit deep and to the left of the center net strap in the deuce court, and to the right of the net strap in the ad court to avoid the return being poached. Serves that are hit slower give the returner more tactical options, including hitting down the line, lobbing over the net player’s head, and hitting short angle winners. Slow serves also can be treated as approach shots and attacked by moving toward the net. Remember though, the approach shot is the only shot in tennis you should never miss since you are planning to win the point on the next shot at the net.

Who should return in the deuce and ad courts? A lot of variables come into play when deciding which player should return on which side of the court. If most of your opponent’s serves are hit out wide and one player has a better backhand return, then the player with the better backhand return should play the ad side. You both want to be hitting your stronger shot most of the time. Also, the player who gets more nervous should play the deuce court because it will be easier for him or her to win the odd point on that side than trying to win game points all the time in the ad court.

But if your opponents can serve to either your forehand or backhand sides then the stronger, more consistent returner should play the deuce court. Here are a few reasons why:

Sliding over to hit more forehand returns would have a negative consequence if the server came to the net after the serve because it leaves the returner’s side of the court wide open. This is why many times on the pro tours, the male player is in the deuce court.

Try “ghost doubles” to reinforce return tactics: In this drill, there are no net players (ghosts). Instead, the server and returner play out points by hitting diagonally cross court to each other.

Ghost doubles is the best way to train return tactics.