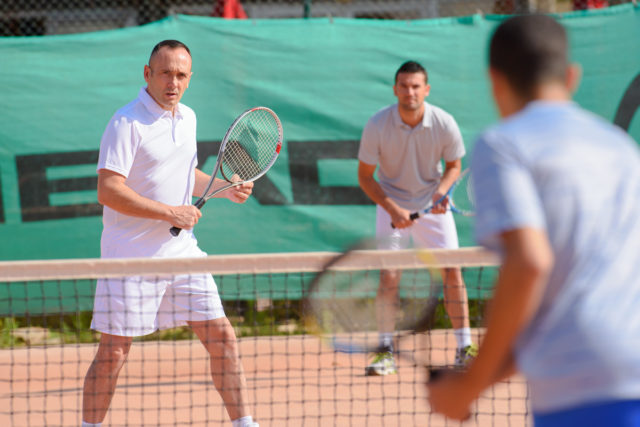 Backcourt tactics refer to shots hit after the initial serve and return have been hit. When it comes to backcourt tennis tactics, you want to play the court first and your opponent second. In other words, you should be aiming for targets based on court geometry rather than your opponent’s weaknesses.

Remember, all tactics and strategy come down to time and distance. The more time you have to hit a shot and the closer you are to the net player when hitting that shot, the more you can attack the net player’s side of the court.

Deep to deep and close to close is a simple and effective backcourt tactic, but it is actually very hard to do. During baseline rallies, players bail out of a cross-court exchange and try to hit a $100 shot from a 5-cent position by going down the line.

The reason is that players have a low shot tolerance. In other words, they lack the discipline, patience and stick-to-it attitude that are needed to stay in a cross-court rally. Players hit two balls cross-court successfully and then get impatient or worry about hitting a short ball and hit down the line. Players also like variety and the freedom to hit lots of different shots, so hitting the same shot over and over can be dull and take the fun out of a doubles match.

But, hey, winning isn’t boring, and if you hit cross-court most of the time (unless you are really inside the baseline facing a high, hanging ball), your chances of winning go way up.

As described in previous “Improving Your Game” articles, try “ghost doubles” to reinforce return tactics: In this drill, there are no net players (ghosts). Instead, the server and returner play out points by hitting diagonally cross-court to each other. Ghost doubles is the best way to train backcourt tactics. There is no better away to practice serves, returns, groundstrokes, approach shots and volleys. This cross-court drill also takes away the down-the-line security blanket and teaches players to have a higher shot tolerance.

Working Together
Playing with a weaker partner is emotionally exhausting. It is like trying to build a brick wall while someone else is taking bricks away. It is why so many doubles teams end up in “divorce.” The more consistent player has to work harder to cancel out the greater number of mistakes made by their partner.

Of course, a player can be unreasonable by having a low tolerance for mistakes made by their partner and not taking responsibility for their own actions. The Bryan brothers are famous for complaining to their mother after every match at the start of their career about each other’s game and wanting to call it quits.

So, to play doubles successfully both players need to be patient with their partner and their skillsets. They need to work together as a team. Having positive and supportive body language goes a long way in making doubles enjoyable. Although I am not a big fan of high fives after every point when it comes to creating team unity (which you see a lot on the pro tours), being supportive and not taking doubles too seriously is a must.