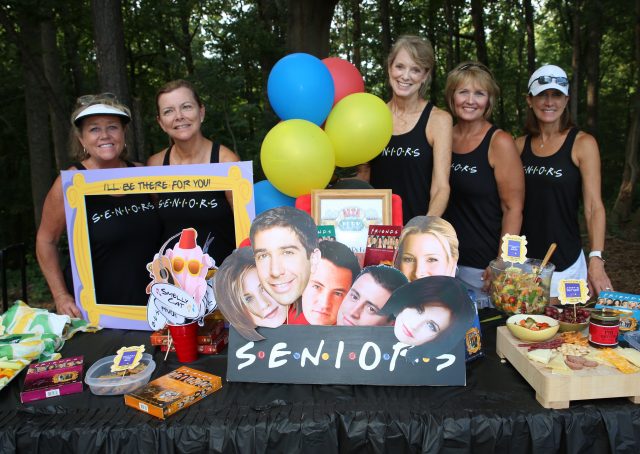 Tennis has a way of bringing out the best in people, and for one senior team from Indian Hills Country Club, playing together and staying together are what have kept their team and their special friendships going strong for nearly 20 years.

While many have come and gone or moved on to other teams, their core group has known each other for years. This past summer season, this AA3 team finished as the division runner-up, advanced through the first round of playoffs, and went on to City Finals. They fell just short of the big plate. However, in spite of the loss, they pulled off a great “Friends” theme for their team tennis attire along with their table.

These “Senioritas,” as named by a founding team member’s mother, have been friends for a long time. They rotate captains each season. This summer’s senior captain, Heather Parker, says they always work really hard on their theme if they make it to City Finals. “One of our teammates has the t-shirts made that go with our theme. She owns a t-shirt and embroidery business,” says Parker. She says they have another team member who is famous for her “sign extraordinaire flair.” “She puts the theme on signs, labels, and other fun props, so we really like to go all out,” Parker says.

Going all out is a natural for this team. From creative minds to countless volunteers, which include coordinators and league vice presidents, this team has a little bit of everything. They make a big deal out of teammates’ birthdays, especially milestones which are big with seniors. They’ve taken several trips together, which include tennis clinics, lake outings, and beach vacations.

Forging these friendships is one of the things that makes ALTA special. People from different ages and skill levels can form teams and play with their friends. It’s the essence of ALTA.

Friends … having great fun and celebrating life and tennis as “Senioritas.”