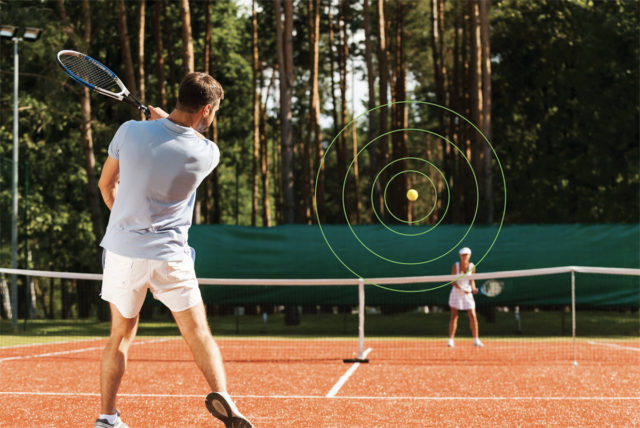 For a tennis player, many things change as you get older. Your eyesight is no exception. Common complaints include not seeing the ball well, not tracking the ball, and difficulty with lights when playing at night. Often, these are normal signs of aging, and opponents your age across the net will be dealing with the same issues.

For everyone around the age of 40, the focusing lens inside your eye begins to stiffen. As that happens, your near vision starts to blur. This may be just a nuisance at first, but within a few years, reading without glasses becomes almost impossible. This condition is called presbyopia. It is one of the most consistent changes that occurs in the human body – it affects everyone eventually.

If you already are wearing glasses for distance, that means it’s time to switch to bifocals. Note: Playing tennis while wearing bifocals requires adaptation – the ball seems to jump and blur as it crosses the bifocal lens. Some players find that special sports glasses with larger lenses without the bifocal work much better. Many others find that contact lenses are best for them.

The same process that blurs the near vision can affect people who never needed glasses in their 20’s and early 30’s. Players with hyperopia (farsightedness) always have used that “zoom” in their natural lens to see clearly at distance. When they were in their teens and 20’s, that worked great; the body just handled it automatically. As they passed through their later 30’s, words started to blur when reading. A few years after that, they needed glasses to see clearly from a distance and up close. These folks may be the most frustrated of all. They usually had incredibly sharp distance vision when they were young. They perceive that they have lost a lot, especially while playing a sport.

With that said, for a tennis player, near vision on the court is not terribly important. Most of the ball-striking decisions are made with the ball more than four feet to five feet away. Getting a full and accurate correction for distance, and having a large field of view, are imperative. So, ditch the bifocal glasses in favor of distance glasses only; or even better, wear contact lenses when playing. Even if you never wore contact lenses before, they may help.

Of course, it’s not enough to just see the ball … you have to hit it. Judging the ball’s location in space is critical. Spatial perception and tracking both tend to decline with age. Studies have shown that tennis players do not suffer nearly as much age-related tracking loss as non-tennis players. That’s good for us, and if you want to enhance your perception and tracking abilities even more, then sports vision eye specialists can develop a training program for you. These training programs emphasize awareness in space and quick response to visual stimuli. These programs are becoming common for professional athletes, including baseball players, MMA fighters, and basketball players. A few hours spent on visual training might give you an edge on the court.

Seeing the ball at night may be the most common complaint of players as they age. There is a good reason for this. It is estimated that up to 90 percent of 65 year-olds have some amount of cataract. Cataract causes light to scatter in the eye instead of focusing to a point. This causes glare and the perception of halos. Clubs that use LED lighting at night may accentuate the problem of glare. LED lights don’t actually emit white light but do emit a combination of blue and yellow light that the eye perceives as white. The blue light component is strongly filtered by a cataract, leaving much less light available for the eye with a cataract. So, if you’ve been complaining that you can’t see well at night, you’re probably right all along. Get a check-up, and if you’re developing a cataract, consider having it removed. Most patients who have had cataract surgery find their night vision improves greatly.

It’s no fun to get older, but if you can keep playing tennis, you’ll have a lot more fun as you do.

Jim Hays, M.D., has been practicing in Atlanta since 1985, and has been with Woolfson Eye Institute for 10 years. More: woolfsoneye.com.

ACING ARTHRITIS
According to the Arthritis Foundation, more than 50 million Americans have been diagnosed with some form of arthritis. Osteoarthritis — the most common form of arthritis — arises because the smooth covering (articular cartilage) on the ends of the bones becomes damaged or worn. It often causes pain, stiffness, or swelling in the affected joint and is a major cause of lost productivity for many people. If osteoarthritis slows you down and affects your ability to play tennis, there are several options to help you get back in the game.

Initial self-care might include rest, ice, topical creams, or over-the-counter analgesics such as acetaminophen and ibuprofen. Once an arthritic joint is identified by your doctor, other treatments can be considered (prescription NSAIDs, opioids, intra-articular joint injections). Eventually, surgery may be recommended.

Current medical research is looking at other treatment options that patients may consider to effectively relieve the symptoms of arthritis in the knees and hips. North Georgia Clinical Research (NGCR) has been providing clinical study opportunities in the Woodstock area since 2002. Bram Wieskopf, M.D., evaluates a broad range of clinical diseases and potential treatments, including options for osteoarthritis.

“Mechanically, tennis is tough on our joints. Many of the patients we work with love the game but have become limited due to chronic joint pain, swelling, and stiffness,” Wieskopf says.

If clinical research is an option you’d like to explore, NGCR can answer your questions and educate you on the process. Learn more at ngclinicalresearch.com.

Dr. Bram Wiespkopf is president and medical director of North Georgia Clinical Research. He is board-certified in Internal Medicine.