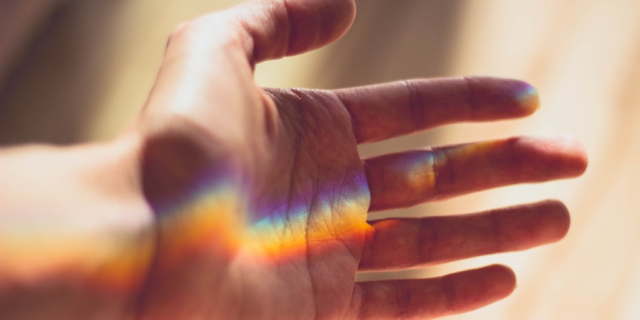 Along with teaching a player how to crush forehands, it’s a coach’s job to help players learn how to analyze and react under the emotional stress of competition. I strive for the day when my students succeed at getting the job done without my presence on the sideline. Unlike a majority of sports, coaching in tennis is limited in most situations during match play. However, here’s a little secret that will allow a coach on court from the first to the last point.

Say hello your new best friend, Porta-Coach. Simply look at the palm of your hand. I’ve assigned a role to each finger, starting with the pinky. By following this simple guide, you have a tangible reminder of how to build a winning game or how to adjust in the heat of the battle.

Pinky
Get it in (20-percent chance of victory). The first thing you need to do if you want a chance to win is to get the ball in, so keep the ball away from lines. Players often find they don’t need to do more as opponents just keep giving away free points. Once you’ve proven that this is not a problem, move one digit over.

Ring Finger
Get them moving (40-percent chance of victory). When keeping the ball in play isn’t an issue, start creating bigger problems for your opponent. In this phase, simply move them side to side, hitting into the corners. Often, this is all you need to do to bring out a bunch more unforced errors. Your opponent may even throw in the towel from all the running. If in this process you begin to miss balls wide or long, simply move back one digit and listen to your pinky.

Middle Finger
Move them up and back (60-percent chance of victory). You may find a player moves well laterally, and sometimes it actually gets them going and playing better. That corner ball also opens up the option for a big cross-court or an equally dangerous down-the-line shot. For that reason, it may be time to add more variety to your game. Frequently, players move up to a short ball, but because of a fear of playing the net, they refuse to continue forward. This sudden stopping at the ball and having to reverse direction often results in slow recovery back to the baseline. Your opponent will be left to deal with a ball at their feet in the classic “No-Persons Land.” While attempting this strategy, if you hit too many balls into the net, simply move back one digit and listen to your ring finger again.

Pointer Finger
Height at which opponent strikes the ball (80-percent chance of victory). Shots that determine the height at which your opponent makes contact will take them out of their comfort zone. With this shot, a player should be very much in control of the match. This really translates into using spins. Hitting medium speed line-drives in the middle of the court might get the job done but isn’t what most players love to see. How nasty is the combination of being pushed deep into the backhand corner to hit a ball above your shoulders, only to have to scramble up to the service line for a forehand that is just a couple of inches off the ground? Keeping the ball out of their strike zone will undoubtedly lead to free points and easy put-aways. Again, if unforced errors start to show up, simply move back one digit; go back and listen to your middle finger again.

Thumb
What is your winner (99-percent chance of victory)? Depending on how you look at your hand, the thumb is either the first or the last digit; this also is true for Porta-Coach. The thumb represents the conclusion to your point. In today’s power groundstroke game, the dominant conclusion is the inside out forehand. As a player, you have to know what is your best/most confident shot; the one you would bet the farm on. My go-to shot is the forehand volley. I build as many points as possible with that shot, using the tools from the other four fingers to put me in position to finish the point with a crisp volley. Find your own go-to shot, and work backwards to see how many ways you can get yourself to that moment.

With the aid of your own on-court coach, your chances of winning are right in the palm of your hand. Nothing is guaranteed, but you will leave the court knowing you did everything you could to get the victory. During your next match, finish by giving yourself a thumbs up!

Has It Been 50 Years?
By Jim Carella, Tennis Professional TPC Sugarloaf Country Club 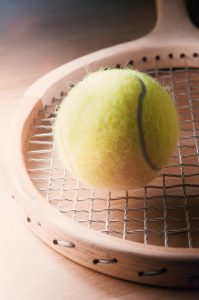 Where do I begin?

In 1969, my seventh-grade teacher, Ms. Doherty — my favorite teacher of ALL time — asked me to try out for the junior high tennis team. I liked spending time with her, so I joined the team and began what would become a love affair with the game of tennis.

Wielding my mighty Dunlop Maxply Fort racket (that’s a wooden racket for some of you), putting on my tube socks and my Converse All-Stars, I headed to the tennis courts not knowing what to expect or what awaited me. Like many other kids who showed up that first day, little did we know how profound this decision would be and what a huge impact it would have in our lives.

That decision I made set the course for my life, including providing me a college education, a 40-year career as a tennis professional, but most importantly, the opportunity to teach thousands of others this beautiful sport. The game of tennis goes way beyond the fences that surround the court, way beyond the winning and losing; it teaches us all valuable life skills. Let me share a few of those I’ve learned:

A lesson I learned early on — because I was NEVER the tallest or strongest player on the court — was fierce determination and mental toughness. Playing the game with intense concentration, but always with a respect for my opponents, was what tennis has taught me.

Additionally, I learned sportsmanship and fairness, and how to win and lose gracefully. I especially learned the latter, as I always seemed to come in second in so many tournaments (both in singles and doubles). My dad, who played actively until he was 94, often would say to me: “Always a bridesmaid, never a bride.” Knowing that I tried my best and gave it everything I had made being a “bridesmaid” at least a little more tolerable.

The ability to problem-solve under stressful situations, to control and channel emotions, and to be more focused are other valuable life skills acquired from the game. When playing, you are responsible for calling all your own lines, keeping score, knowing the rules, and most likely conducting conflict resolution at some point.

It’s true that tennis is an individual sport, but most of us are playing recreational doubles, and we enjoy being part of a team for league play. This team concept teaches all of us that we are part of something bigger than our personal needs and wants, and what a great life lesson this has proven to be!

In thinking back over the past 50 years about how much the game has changed — from racket technology to off-court fitness and nutrition to optimizing the mental aspect of the sport — there is no comparison to that first day when I was introduced to tennis.