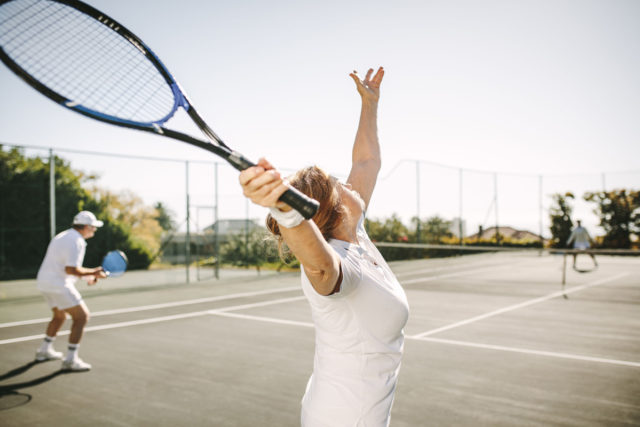 Doubles Alert! Where are you positioned before every point in your doubles matches? As the Director of Racquet Sports at the West Side Tennis Club in Forest Hills, New York, my daily doubles observations are very interesting. I see all kinds of formations and set ups. A player’s pre-point position is mission-critical in successful doubles. Each player has a responsibility to cover certain areas of the doubles court.

From covering the line while always looking to intercepting the high-percentage, cross-court shots, I always want to see my West Side players in what I call “the jump seat.” This is standing in the middle of the service box, right in front of where their partner is serving. This is a sound starting position to cover the down-the-line and cross-court returns while far enough back to cover most lobs. I see players who are unaware of a proper starting point that leaves the middle of the alley wide open for the other team.

When teams return, I want to see the off partner (player NOT returning serve) in what I call the “hot seat.” This is right next to the “T” on the service line. Your number one priority is to call the serve for your partner, allowing him or her to concentrate on playing a great return. The second priority for the hot seat player is to watch the “jump seat” player on the other team. If this player crosses, their number-one option is down the middle and YOU should be there to take that option away. Tennis is a series of moves and counter moves. The doubles game and all of its complexities – with multiple players and bigger court dimensions – creates a tactical advantage for the team that sets up the pre-point properly.

Take advantage of your opponents’ poor pre-point positioning. If an opponent is too far to the sideline or too far back from the net when their partner is serving, most times it tells me they do not like to volley. That is a GREAT opportunity to feed them a constant diet of volleys. If your opponents’ pre-point position is extremely close to the net, then a lob is the answer to this aggressive net player.

Moves and counter-moves should be your competitive mindset to everything in singles or doubles. Don’t forget to communicate properly to your partner so that he or she is always in the right position. Encourage them to see why you want them to be in the jump seat or the hot seat.

Enjoy your tennis and always look to improve your positioning. Go for winners!