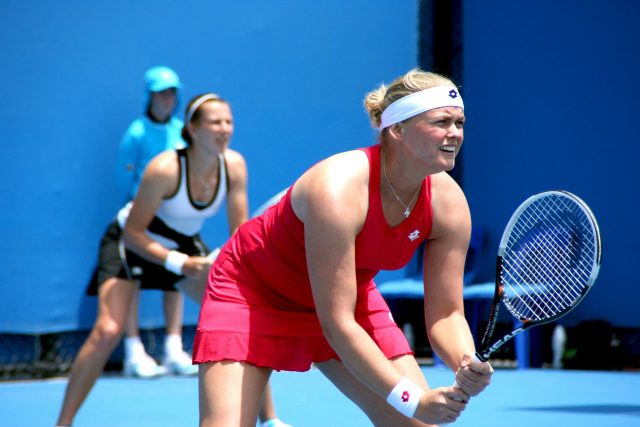 Last year was a challenging year for ALTA and our members as COVID-19 impacted so many aspects of our lives, including recreational tennis. However, one key component of ALTA league play has remained, and that is good sportsmanship. We love to hear from our members when they encounter extraordinary examples of good sportsmanship while either playing or organizing their matches.

Please reach out to your coordinator or a league vice president if you wish to nominate an ALTA member for a good sportsmanship award. You also can find a nomination form at altatennis.org>ALTA Documents>Captain/Manager Handbooks>Sportsmanship Nomination Form.

Sharon Lester Tennis Center
2021 Winter Mixed B1
Captain: James Forde
Players: Grace Nelson, Christopher Jones
Nominated by Elizabeth Skillen, Connemara
I am writing to nominate Sharon Lester Tennis Center, B1 winter mixed team for an ALTA Sportsmanship Award. I have played ALTA since 2011 and can’t remember a match that was as cordial, competitive, and fun as the match that I played today. I played line 2 against Grace and Christopher in a match so close, on any given day, either side would take the win. I was so grateful for how simply kind our opponents were regarding line calls and during change overs. We laughed. We applauded hard-fought points. It was so refreshing to have a match that felt like a relaxing pick-up game, with the banter and sportsmanship, while at the same time super-competitive as both sides played “up” to the challenge of the match. When I left the court, others on my team had similar experiences. My teammate, Sue, and I talked about the small gestures of “nice shot” and “thank you” for retrieving a ball, as a common theme across the matches. The match today was a beautiful beginning to 2021 given the grief and challenge of 2020. I didn’t realize how much I needed the fun today. I am grateful to my fellow ALTA members at Sharon Lester Tennis Center for demonstrating true sportsmanship on the court today! Many thanks!

Chimney Springs
2020 Fall Sunday Women C1
Players: Amy Hickman, Valeria Bratt
Nominated by Karen Eskew, The Falls of Autry Mill
I am captain of the Falls of Autry Mill C1 Sunday Fall 2020 tennis team. I played against Amy Hickman and Valeria Bratt from Chimney Springs team on Thursday, October 15 as a reschedule match for a rain delay. They drove a long way to reach our courts. What struck me was the joy and positive spirit they displayed on the court. My partner and I beat them, but they worked hard to win each point and showed tremendous, positive spirit. They complimented us and gave the best line calls, and in defeat, they exemplified true ALTA tennis spirit. Matches like these make me want to play and rejoin each season when our opponents come to the match with an aspirational sportsmanship attitude.

Horseshoe Bend C.C.
2020 Fall Thursday Women C2
Captain: Sherri Harris
Nominated by Rhonda Kupka, Chateau Elan Sports Club
We played Horseshoe C.C. in the first round of the playoffs. Everyone commented about what a pleasure it was to play such a nice group of ladies. The line calls were fair and honest, and there were no disputes throughout the matches. They exuded great sportsmanship during our playoff match; they followed up with a “thank you” text for hosting them. They also sent us a congratulatory text after we won the City Finals. This was a very pleasurable experience for a playoff match. Thank You!

Penhurst
2020 Fall Sunday Women B7
Captain: Melissa Meredith
Nominated by Traci Baskin, Clayton County Tennis Center
I wanted to send a brief note regarding the sportsmanship of Melissa Meredith and the Penhurst team. I had a player that totally got the date of the playoff match incorrect and was a bit delayed in her arrival. I thought we would have to forfeit the entire match as the player was playing line 1, and I didn’t have anyone available to fill in. Meredith calmed me and told me they would wait for the player to get there even beyond the normal wait time. I thought that was so admirable because I honestly don’t know if I would have been as accommodating. I would have been worried the team would beat us and been eager to get the forfeit, so they could move to the next round. I must say, Meredith is really a true sportsman, and I am committed to being more generous moving forward. During my short tenure as an ALTA captain, I have never encountered a captain as considerate as Meredith. Her team was super-classy. I have certainly played matches where the atmosphere was contentious, but this team was so nice, and I don’t think there was one disagreement about a line call or a score. I told Meredith this was the one time I was actually OK with losing; they are awesome players and displayed excellent sportsmanship!