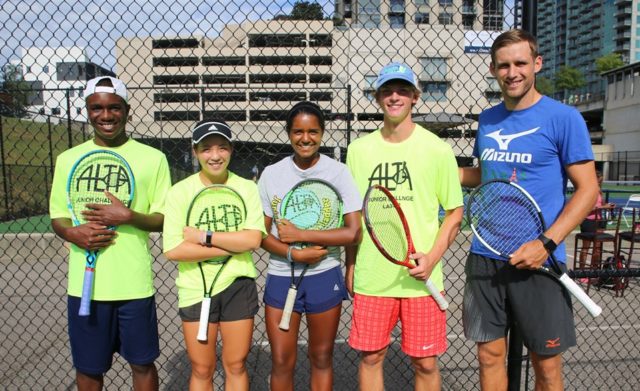 Dozens of players from the ALTA Junior Challenge Ladder had their day in the sun during this year’s BB&T Atlanta Open presented by First Data. On ALTA Day, July 22, players were able to participate in a clinic on the practice courts. They warmed up and were able to experience some good coaching from Wayne Bryan, the famous dad of doubles legends Mike and Bob Bryan. Hometown hero Kevin King also was in on the fun as he joined the court and played points with the JCL members.

Later in the day, top JCL players were recognized on stadium court and were able to take in some night action to watch the exhibition match between Andy Roddick and Robby Ginepri.

This year’s JCL kicked off the season with a special gathering at Sandy Springs Tennis Center, as the ladder managers met with me to learn the rules of the ladder and enjoy some social tennis. The ladder is currently underway and will close on December 6.

JCL Seniors
In the last issue of Net News, we introduced you to three of our seven high school seniors who are moving on and saying goodbye to ALTA and the Junior Challenge Ladder. Now, meet the others who are continuing their education at some truly outstanding schools.

Tres Gonzalez
Tennis always has been a big part of Tres’ life. He began training at UTA and playing tournaments when he was about eight years old. He joined the ALTA Junior Challenge Ladder when he was 10. “Juggling time between baseball and tennis, the ladder enabled me to get extra time on the court with my friends whom I didn’t necessarily see year-round,” says Tres. He says his fondest memory was winning Winter Nationals and getting a “gold ball” with his good friend, Garrett Johns.

“I encourage everyone on the ladder to follow your dreams; play as many sports as your parents will let you play,” he says. “Tennis is a sport I’ll be able to play when I’m 70 years old, and I have so many friends that I hope to play with later in life.” In the meantime, Tres will turn his attention to baseball as he has committed to play at Georgia Tech. He also is hoping to hit with a few of the guys on the Tech tennis team who were also on the ladder when Tres was younger.

Tennis runs through the Gonzalez family, as Tres’ father is BB&T Tournament Director Eddie Gonzalez and his mother is Jennifer Gonzalez, who is also a wonderful tennis athlete and helps teach tennis. Tres’ sister, Gabriela, was also in the top 10 of the girls’ JCL.

Garrett Johns
Garrett would agree with the sentiment of his good friend, Tres. He says getting to play a sport with his friends, many of whom he has known for 10-plus years, is what he will remember about the Junior Challenge Ladder. This coming from a young man who finished #1 on the JCL last year.

He started going to the Riverside Club when he was six years old to watch his older brother, Cameron, and his mother play tennis. He soon took an interest in the sport and started doing drills and taking lessons. That led to USTA tournaments when he was eight, followed by ALTA Junior League play. “Tennis is a great sport. I would tell younger players to enjoy the game and treat tournaments and practices as just that, a game. Games are fun, but if you start to put too much pressure on yourself, there is a good chance you will burn out,” says Garrett. He adds that it has been fun to experience his tennis journey with so many guys whom he knows so well. “Now that my Junior ALTA career is coming to an end, I plan on playing Futures throughout the summer.” Sounds like a smart guy. Garrett will begin his college tennis career at Duke University in the fall. “Go Blue Devils!”

Imani Vincent
Imani has spent half of her life dedicated to playing tennis. She says it all started with ALTA. “The game of tennis and ALTA have impacted my life in ways that I could never have imagined,” says Imani. She played on her first ALTA team at the age of eight. “This experience positively impacted my life and was the catalyst in helping to solidify my love for tennis.”

The very next year, at age nine, her ALTA team made it to City Finals, and from 2009–2014, she played on various ALTA teams. She signed up for the ALTA JCL in 2013. She says the ladder offered high-level tennis competition while also encouraging sportsmanship, round-robin play, and prizes. “During an ALTA Challenge Ladder match against a highly ranked player, I can still recall setting a goal to just win a few games,” Imani remembers. “However, I ended up winning the first set and losing the second set in a tie-break. I lost the match, but because of the ALTA experience, my confidence soared, and I went on to win a lot of tough matches.”

Imani says the ladder was a memorable experience and due to the caliber of players against whom she competed, she was able to add a level of mental toughness she never knew she could achieve. “The advice I would give younger players is that hard work, dedication, consistency, and perseverance are what it takes to be successful in tennis and in life,” she says.

Imani says when she was younger, her goal was to play on an ALTA team with her friends in her subdivision, but now she is on her way to play collegiate tennis. “I am ecstatic to have recently committed to play tennis for Piedmont College in Demorest, Georgia. I am thankful to ALTA, and I will cherish what I have learned from being a part of the ALTA organization and its positive influence on my life.”

Jonathan Mascagni
Jonathan was introduced to the great sport of tennis at an early age and began playing when he was six. His father loved the game, and he introduced Jonathan and his sister to the game. “My best friends in grade school was Reilly Wilson, and his father, Jeff, happened to be a tennis pro and owned Alpharetta Tennis Academy,” says Jonathan. He says the Wilson’s house on Charlotte Drive, which had courts on the property, became his second home and the clay courts there became his passion. “I played a few other sports like soccer and baseball, but always came back to tennis,” he says. “I did play a few seasons of Junior ALTA for fun and was drawn to the Junior Challenge Ladder because of solid match play that was offered.” Jonathan says he is grateful for the many individuals who volunteer their time and expertise to run the JCL, making it such an awesome program.

This fall, Jonathan will attend the U.S. Air Force Academy in Colorado Springs, Colorado, and play tennis for the Falcons. He believes it has been a privilege to travel to so many places and meet so many great people while playing junior tennis. “I am very excited to start the next chapter of my life and have the opportunity to play tennis at the college level,” he says.