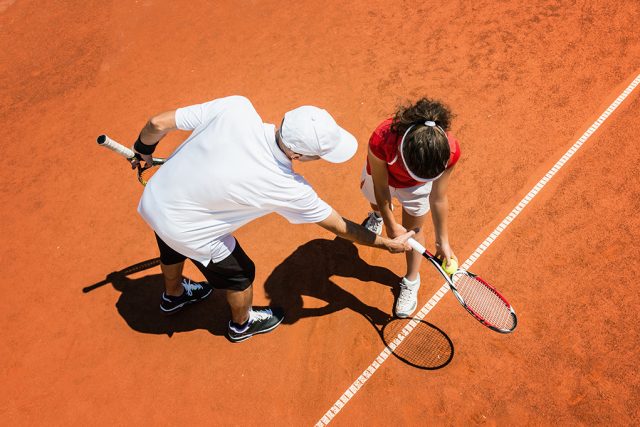 Summer time, sunshine and tennis. I can’t wait for summer tennis! I love all of it. The hard court game; the clay court game with the heat and humidity; the entire country has tennis action for all levels and the courts are packed.

There are some really good pro tournament options from East Coast to West Coast. The summer season ends at the US Open in New York City, but one of my favorite events is in the ATL. Atlanta has an ATP event for the mega fan who wants to see the game up close and personal — the BB&T Atlanta Open. Atlanta is the largest tennis city in the world, and the talent behind the racquet is evident in every club and subdivision tennis court.

Atlanta can tennis ball! So, when the ATP Tour comes to town in July with all the global tennis talent, the energy is amazing. Now, add one of the coolest venues to play a tournament in with Atlantic Station, where you can see great tennis with amazing shopping just steps from the courts, and the BB&T Atlanta Open should be a stop on your tennis list this summer.

My own summer tennis calendar is filling up from May through September. With tennis camp and club appearances, plus some World Team Tennis action on the TV side of the ball.

One thing I really enjoy doing is talking to young players about our great game. I try to instill a passion for what is possible through tennis if you apply yourself. I tell them about my family’s journey in tennis and how all of us are still part of the game in different ways after 50 years. I have found a magic within the game that I want to share with young players.

When I ask young players why they play tennis, I usually get a blank look back in my direction. When I speak to tournament players about their confidence under pressure, they seem to shrink at the question. I explain to the next generation that tennis needs to be fun. No matter what the outcome, playing happily is paramount. I go to tournaments these days with my nieces and nephews, and I am saddened to see so many kids on the court who are not having fun. I’m going to really sound old, but way back when I played, there was a buzz in the game. So many of us were hungry toward greatness. Climbing the rankings and developing new skills to improve was always a theme in practice sessions.

My junior tennis development was always based on tomorrow’s game approach. When I was in my teen years, my physical skills were ready for anyone on the planet, but my tennis skills had to be there as well or I was going to fall too far behind. I was blessed with amazing athletic parents who understood this approach and introduced me to very talented coaches. One of those was during my sophomore year of high school. Brian Marcus was a standout at the University of Michigan, who taught me Jack Kramer big tennis game. Kramer, a legendary Wimbledon champion, revolutionized the attacking-style that dominated the game.

Brian understood what my game of tomorrow would be and was encouraging about moving me forward. The first four months of training was about the big game every day. By the end of the four months, I had a complete game — the endless stream of consistent groundstrokes with added tactical punch, combined with the serve and volley. After just two years working with Brian, I was playing in my first US Open.

I was influenced by other mentors such as Dick Leach, my college coach at USC who was a master in match tactical genius, as well as Brian Gottfried, Arthur Ashe and Billie Jean King. These great pros taught me the work ethic of a professional and understanding how to play under pressure better during big points.

All of the coaches and many more like my first tennis coach, Don Dickinson, taught me the fundamentals and, more important, how to have fun thorough all the ups and downs of development. All of these mentors were tremendously high character people who had a deep faith in giving back to others. I was honored to work with all of them, and I owe everything I’ve accomplished in tennis to them.

I often wonder when I watch juniors compete and practice today what their life values are. The USTA has built the National Campus in Orlando; I call it “The Death Star.” It is the largest tennis facility on the planet for all levels of play, but mainly to develop American tennis champions. Millions of dollars have been poured into this never-before-seen scale of projects, but I know how much character is being developed in these approaches to develop a player’s greatness. It doesn’t take millions of dollars to teach fundamentals in character building. It just takes coaches and mentors who believe in developing the person first and the player second.

The greatest gift from all my coaches was to treat the two imposters — “victory” and “defeat” — the same. Once I mastered that, I could lose a match, but I was never defeated.