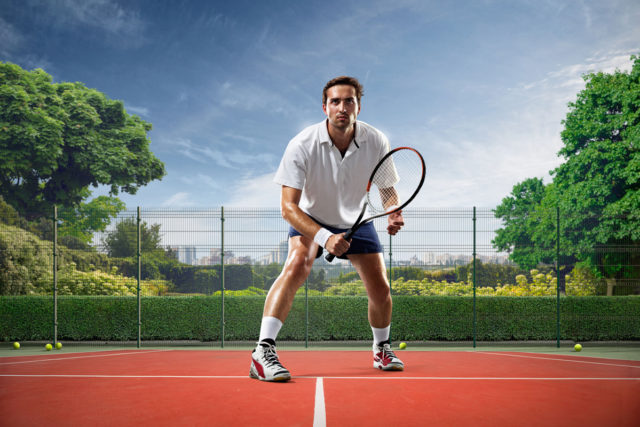 In previous articles, I have discussed baseline doubles tactics, but these strategies also apply to the net player. Similar to hitting a inside the baseline, ABC volleys (balls hit ABOVE the net, the player is BALANCED, and the player is CLOSE to the net) should be hit at the net player. Balls hit below the height of the net, under pressure, or hit around the service box line should be hit to the baseline player. Remember, when volleying at the service box line you are actually closer to the baseline than you are to the net, so you are in a defensive position by definition.

At low-level competitive doubles where movement, concentration offensive capabilities are limited, deep-to-deep and close-to-close tactics don’t really apply. Hitting a defensive volley to the opposite net player or hitting down the line to the net player from the baseline can work just as well (or at least have a random statistical pattern). But at higher levels, doubles teams will get severely punished playing this way.

Net player movement
A big part of net player tactics is being in the right place all the time. You should not look like a potted plant and be static at the net. The net player should be active by constantly moving forward and backward in a triangle based on what the two baseline players are doing. (See Figure 1.)

The server’s partner starts the point between the net and service box line at the edge of the “kill zone” and slightly off center, so his or her left foot is 3-feet from the singles sideline. This allows him or her to cut off a down-the-line passing shot. Once the net player sees the return going cross-court, he or she should lunge toward the net to potentially poach the return. The net player always should be looking to poach. You need physicality and you need to be intimidating when playing the net in doubles. This requires concentration and the ability to tell yourself that every ball is being hit in your direction. If the ball is hit to the left side of the center strap (or right side from the returner’s perspective) the net player should be able to poach the return.

The returner’s partner, meanwhile, should be at the service box T. This is a defensive court position which allows players to “dig in” and defend a possible poach from the server’s partner at the net. (See Figure 2.)

If the return is hit successfully cross-court, then the server’s partner should move back to the service box T to adopt a defensive position so they have more time to react to a potential poach from the opposing net player – who should be moving from the service box T up to the edge of the kill zone, again slightly off center so they are able to cut off a potential passing shot. Once your baseline partner hits the ball back cross-court past the opposing net player, you should move forward again to a more aggressive net position – unless they anticipate a lob. (See Figure 3.)

It takes time and effort to learn to move properly at the net because players are conditioned to be static. But it is worth the extra effort. An active net player is hard to coach against because he or she causes contract distractions for the baseline players and makes their target area much smaller. And being active at the net is the only way you consistently can beat players of your level or because these opponents don’t help you out as much in the unforced error department – so you have to collect the extra points needed to win by increasing your winner/forced error count.