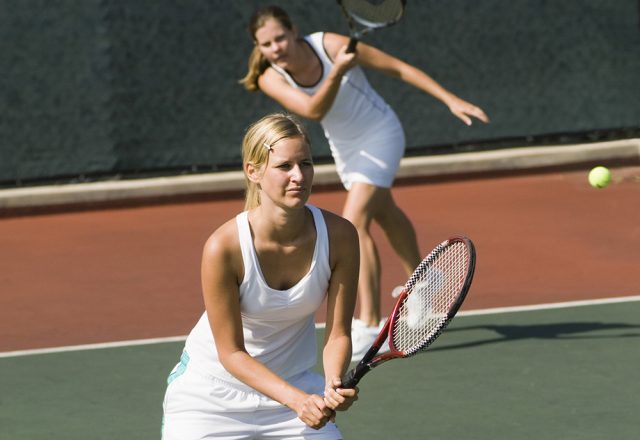 With the allowance of on-court coaching at the professional level, why not coach each other in doubles on changeovers with short phrases to ponder, strategize, and then implement during your matches? Consider the following tactics with your doubles partner:

Calibrate to Devastate
Practice a swing that makes the ball land around the service line. That same swing works when you are at the service line and keeps the ball deep. Anything closer is a volley! No balls missed deep!

If your opponent is closing, that same swing keeps the ball low and they must volley up!

Volley Anyone?
Practice volleys and dropshots that bounce twice before reaching targets. Then incorporate this strategy into your matches as opponents only get one bounce!

Alter Configuration, Change Court Dimensions
Change where you stand. I had a team that did not lose a match for five years! One of them never hit a ball from the ad court. They used the Piggyback/Australian formation when serving. Her partner served from the center hash and net partner immediately slid into the ad court! This tactic is legal and was good for at least two games every set!

Empty Box Tennis
The court in doubles is divided into four rectangles, two occupied and two unoccupied at start of most points. When serving, the ball must land in the service box. Return the same way. This impacts the server by forcing movement. Once you have manipulated the serve team by moving the server in, probe the middle or lob. Play to the empty box!

Offset Feet
Keep your feet “unparalleled” at the ready stance. Check out Bianca Andreescu when returning serve. Her feet are offset. This promotes bended knees and stepping into your shots! I have discovered that I am more prepared by offsetting my feet, and thus, am in position to play either forehand or backhand properly because the feet move instinctively.

Tilt and Lift
At net, tilt to open your racquet face off the bounce. Lift to clear the tape! We are always doing one of two things: tilting for volleys and lifting for groundstrokes. Keep the game simple and fewer things go wrong under duress! This relieves the stress!

Play in the Direction You Are Moving
Keep your body out of the way. Face where the ball is coming back from when you make your shot!

On the move, play the ball in the direction you are moving. It will keep the body out of the way on the shot and place you in a position to defend because you are facing where the ball is coming back from! 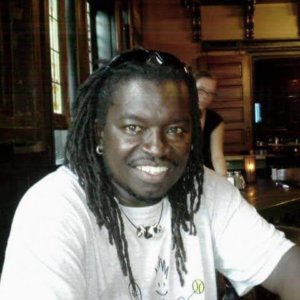 How did you get involved in teaching tennis? Ladies on a mixed team I was on at Washington Park asked me to coach them after our season ended. I spent 21 years in IT solving problems. This seemed a logical extension.

Best part of your game? Hands!

Dream doubles match would be me and… Daughter Rana vs Roger Federer and Serena Williams.

When I’m not teaching tennis, I’m… Listening to books online while watching tennis.

My favorite tennis memory is: When my parents came to North Carolina from Virginia to watch me play in the IBM Watson Trophy Tennis Finals!

#1 reason why I enjoy teaching & coaching tennis: It is about the relationships as you help people with tennis challenges that often parallel life challenges.

What important tennis message do you want to promote? Learning and having fun are not mutually exclusive.