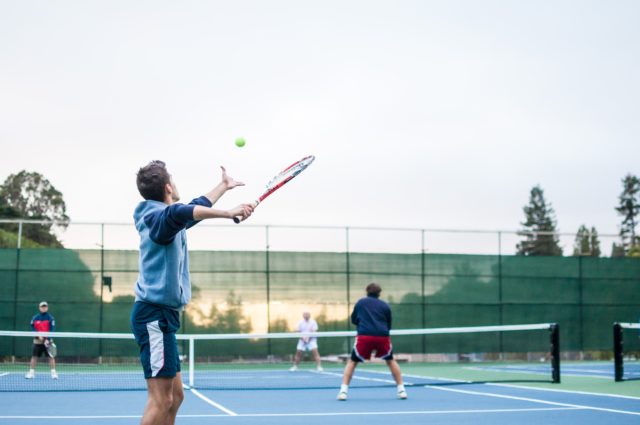 I’m a coach who believes in winning! To me, attempting to win is a lot more fun than waiting for your opponent to lose. Many players work hour upon hour trying to develop a specific shot they believe will make them invincible, but they still end up on the losing side to that ancient slicer dicer. It’s important to understand that the game is a lot more than the mechanical action of stroking a ball. I can’t tell you how many times I remind players of all levels that the mechanical action of hitting the ball is only a part of being successful. Players must learn to play.

When we think of “playing” we think of children, happy times, fun. Whether it’s hide and seek or tennis, there are rules and strategies to be followed. It amazes me how easy it is for kids and adults to come up with logical strategies but fail to use them in the heat of the moment. It is for that reason that I created this simple concept to help keep you focused and understanding how to play winning tennis.

Begin by breaking the court into three hitting zones. Between each zone, create an area of about three feet; (or as I refer to them, Border Zones) these are the places to be when preparing for the oncoming shot. Zone 3 starts a couple of feet behind the baseline and ends halfway between the baseline and service line. Zone 2 ends one foot in front of the service line. Zone 1 goes from inside the service box to three feet from the net.

At the club level, most players spend a majority of their time in Zone 3, with balls landing in Zone 2. These points tend to begin and end there, usually by an unforced error being hit from Zone 3 or a forced error in Zone 1. The forced shot tends to occur when one player is required to hustle forward, hoping to get a drop shot winner accidentally hit by their opponent, or by attempting a reluctant volley.

At the pro level, a majority of the points are won from Zone 2, with a forcing shot of some kind. The difference between the average player and the pros is that the pros’ Zone 2 extends further back toward the baseline. As your game improves, you too can expand your Zone 2. We seem to think that play takes place in Zones 3 or 1. The next time you play a match, try to incorporate the positioning the pros are striving for. If you are looking to strike as many balls as possible from Zone 2, I’ll bet you’ll be in position a little earlier and you will feel like a miracle has taken place. When you are stuck in Zone 3, you’ll no longer be rushed on your strokes, but in fact, feel as if you have to wait for the ball.

When moving forward to the ball in Zone 2, strike it in an offensive style. Move through Zone 2 and reorganize at the next border separating Zones 2 and 1. Once again, analyze the situation there as your opponent hits the next ball, then move forward in Zone 1 for the finisher. As an insurance policy, move back to the borderline separating Zones 2 and 1 as it is likely your opponent will be thinking about sending up a lob. If the lob doesn’t appear, move back to the front of the Zone 1 and try to finish them off again.

Warning: When players are learning to come in and have aspirations of Federer-like volleys, they often make the mistake of trying to get from Zone 3 to Zone 1. The tendency is to blame poor volleys for losing the point when in fact they never got a chance to make a solid volley as the ball was sent whizzing past them. Poor positioning by even the greatest players results in poor shot-making. Remember to set up camp at the borders.