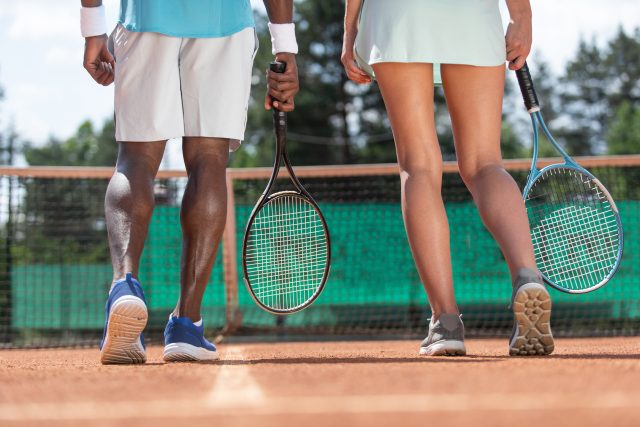 In club tennis, doubles teams play one up/one back because of the possibility of an opponent hitting a lob or too many balls at their feet, but even on the pro tour, the one up/one back formation also is common.  Serving and staying back, hitting too many returns to the net person, leaving the middle wide open, hitting too many volleys to the outside of the court and hitting too many touch volleys occur at the highest levels of the game. Successful doubles teams, such as the Italian duo Roberta Vinci and Sara Errani, play like this, but they are to be respected. In 2014, they hung tough and came back from being down 5-2 in the third to win the Australian Open doubles title.

When it comes to developing as a player, you should be learning to attack the net and hit down the middle by practicing approach shots, volleys and overheads. A chess master understands positioning, and so should a tennis master. The aim in doubles is to finish points at the net. Lisa Raymond is a great example. The Bryan brothers said, “Lisa Raymond is money in doubles.” She was in the top 10 in doubles at age 40. It should be mandatory for all women playing college tennis to watch at least five minutes of film of Raymond playing doubles.

Certainly, your approach shots, overheads and volleys need to be just as good as your ground game, but hey, you don’t want to be the same year in and year out, hoping your opponent makes more mistakes than you. You want to learn “big kid” tennis, and that means finishing points at the net.

Try these drills to reinforce attacking the net:
Game 1. In this drill, there are no net players (ghosts). Instead, the server and returner play out points by hitting diagonally cross-court to each other. There is no better away to practice serves, returns, ground strokes, approach shots and volleys.

When it comes to overheads, playing against a club player who is good at lobbing will give you a good workout. If they are not rushed, they can lob close to the baseline every time.

A good drill progression for getting players comfortable coming to the net in doubles is:

Game 2. I have a rule for ALTA league players practicing doubles. At every team practice, for at least 20 minutes, I have my players play one-bounce doubles. If the ball lands a second time on your side of the court, you automatically lose the point. The one-bounce rule in doubles develops and teaches the instinct to go forward.

Game 3. Try an offense/defense drill with two players at the net and two at the baseline. This is an excellent game-based drill for teaching baseliners to hit lobs and dip off-pace passing shots at the feet of the net players. It teaches net players to volley hard down the middle, to angle overheads and to hit drop shots.

A fun, self-regulated variation is “Capture the Net.” In this game, 10 to 15 balls lie on each side of the net. The net team feeds a ball down the middle, which must land in the back box. If the net team wins the point, they feed another ball from their side of the court. If they lose the point, they run back to the baseline while the baseline team runs to the net and feeds one of their balls. The team who gets rid of their balls first wins the game.

Game 4. The game “105” is an excellent indicator of how much offensive capability (finishing points at the net) players have. Two teams on either side of the court start at the baseline. In pairs, they try to win points for their team like this:

The team that loses the point rotates off, and a new pair take their place. The game is excellent for getting players to win points at the net in doubles. The longer the game lasts, the less offensive the group is. Adult club players find it difficult when they first play this game to get more than one point at a time. For them, scoring moves at a glacial pace. In such situations, “55” might be a better alternative until they learn to win more points at the net.